Some California cities and counties (Municipalities) levy Utility Users Taxes (UUT) on “users” of utilities services — such as natural gas, electricity, water, and telecommunications — within their borders.1 UUT is usually collected by the local utility distribution company (Utility) and remitted to the Municipality.

In our experience, UUT should not be collected from federal, state, or local public agencies (Public Agencies), such as public school districts, county offices of education, and community college districts.

Please note that SPURR is not a law firm. For definitive advice on this or other legal matters, Public Agencies should seek qualified counsel.

UUT is often confused with sales taxes, but they are not the same thing.

In California, sales taxes have statutory authority that expressly excludes application to the sale of gas, electricity, and water delivered through pipes or lines to consumers.2 Municipalities may choose to levy UUT, which taxes a “user” rather than a “sale.”

When a UUT ordinance is adopted, the codified definition of a “person” using utilities services who is subject to UUT consists of a long list of entities that usually does not include a Public Agency. For example, the City of Benicia’s UUT tax applies to a “Person,” defined as “any domestic or foreign corporation, firm, association, syndicate, joint stock company, partnership of any kind, joint venture, club, Massachusetts business or common-law trust, society, individual or municipal corporation.”3 There are no Public Agencies in that list.

UUT ordinances often exempt from UUT “any person when imposition of such tax upon that person would be in violation of the Constitution of the United States or that of the state of California.”4 This exemption probably is due to State of California constitutional constraints against one Public Agency imposing fees or charges on another Public Agency without express authority from the State.5

As noted above, UUT ordinances often exempt Public Agencies by implication, by not including Public Agencies in the definition of a “person” subject to the tax. In some cases, the UUT exemption is also explicitly acknowledged.

For example, some Municipalities publish their recognition that Public Agencies are exempt from UUT. 6 Also, the California League of Cities has published a law firm memo on this topic which states, “a public entity would be exempt from the levy of a utility users tax by another public entity absent express statutory authority therefor.”7

The State of California Department of General Services (DGS), in its State Administrative Manual, directs that State agencies that receive utility bills including UUT must “contact the utility and advise it that the State is not subject to the tax.”8

What to do if a Public Agency is billed for UUT

Even though Public Agencies should be exempt from UUT, for any number of reasons, a given utility account may not be coded properly as UUT exempt in the Utility’s billing system. For example, when a service account is closed for construction and later re-opened, the prior UUT- exemption coding may not be applied to the new account number.

Public Agencies should review Utility invoices at least annually for UUT. A redacted sample invoice showing UUT, with SPURR annotations in the blue box, is attached to this memo.

Public Agencies who find UUT on their invoices should
(a) ask the Utility to remove UUT from future invoices, and
(b) seek refunds of prior UUT from the Utility or the taxing Municipality.

Each Municipality has their own process for proving a UUT exemption. A letter from the Public Agency stating that it is exempt from UUT may suffice. The exemption letter should be accompanied by a list of affected utility accounts numbers and street addresses.

In our experience, whenever a Public Agency proves an exemption from UUT, the Municipality will agree that the Utility should stop collecting the charges for the specified accounts. Some Municipalities will refund prior UUT payments going back a year or more. Others may resist refund requests. It all depends on staff at the taxing entity. We know of at least one Public Agency that retained retaining attorneys to obtain exemptions and refunds from their city. 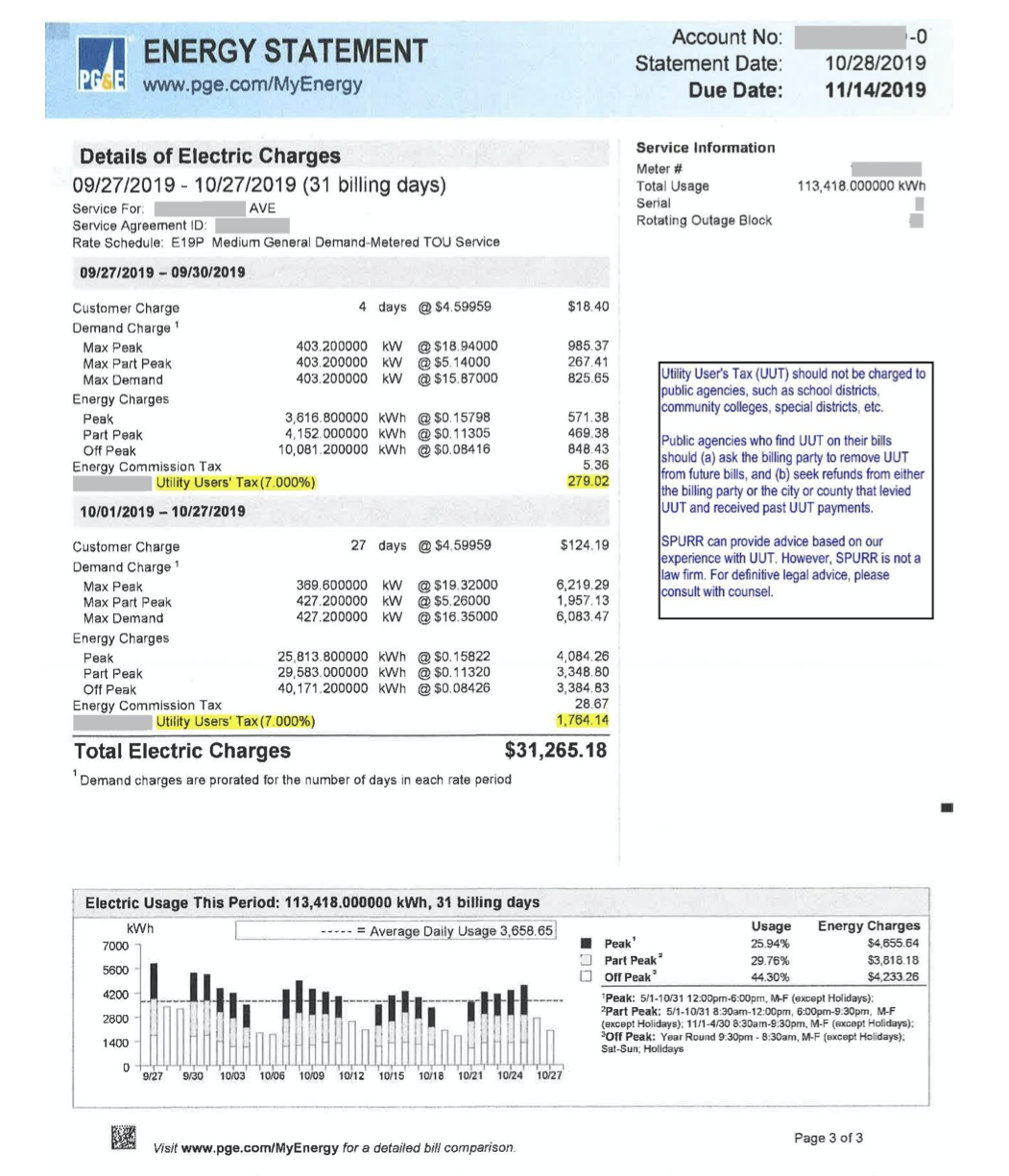 1 A partial list of UUT jurisdictions, posted by a collection services firm, is at http://www.uutinfo.org/uutinfo_city_menu.htm. We have been unable to locate a comprehensive UUT list.

5 See, City of San Jose v. Joseph H. Donohue (1975) 51 Cal.App.3d 40, at p. 45, “Counties and other public agencies were exempt from utility taxation and said exemption is a reasonable classification as such agencies are public-supported and would merely add to the tax burden of the same taxpayers as pay the utility tax.” http://law.justia.com/cases/california/court-of-appeal/3d/51/40.html